Taking pictures is a way of keeping memories. Whether it is your big day at work and need to or you are on a picnic with your family, taking a selfie is a good way to keep the memories alive. There are so many times when we will want to take pictures and when that time comes, we all agree on one thing; we need a good camera. If you have the Samsung Galaxy Note 9, it is the only device you need thanks to its intelligent camera. The 12MP and 8MP dual cameras take perfect pictures using intelligent technology. What is this intelligent technology? There are two main features this entails and here we will look at both of them and what they have to offer. Read on to learn how to use these features to take professional-looking images.

How the Scene Optimizer help you take better photos?
Point out flaws in your photo with Flaw Detection
How to turn off scene optimizer and Flaw Detection

How the Scene Optimizer help you take better photos?

This is a feature that enables the camera to detect what the intended subject of the photo is and optimizes the settings to give the perfect image. This scene optimization is achieved using Artificial Intelligence (AI). This is very good because different scenes require different lighting and colors to get the perfect shot.

How does this work and how can you use it?

The scene is determined by analyzing the objects in the camera’s vicinity using real-time intelligence. It can recognize 20 scenes depending on the time and objects seen. When the scene is identified, the camera settings are automatically changed so they give the best possible image. Some of the settings changed are brightness, contrast, white balance, and exposure. 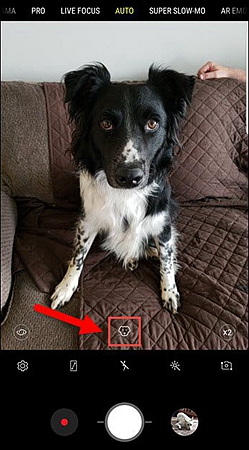 What exactly does the scene optimizer do?

It has 20 modes or scenes it can deduce and take the necessary action. One mode is the flower which is activated when the object to be captured is a flower. When this is the case, the color, brightness, and contrast are adjusted to give a vivid image. On the other hand, if it is sunset, the brightness is reduced and red color adjusted to give the perfect shot. If food is the main focus, the saturation levels are increased and yellowness adjusted. In low light, the image synthesizing algorithm will be used to make the perfect low-light image. With many other scenes, you will get the perfect image no matter where it is.

The Samsung Galaxy Note 9 camera is really intelligent; it even knows how to prioritize! It can easily differentiate the main object and the background of the image with a person being given the first priority. 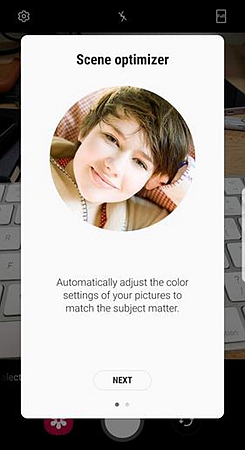 How do you set up the scene optimizer?

Start by opening the camera app. Tap on “Settings” and then “Scene Optimization”. If it is blue it is on but if it is gray it is off. Toggle so it is blue and from then on your pictures will be scene-optimized. 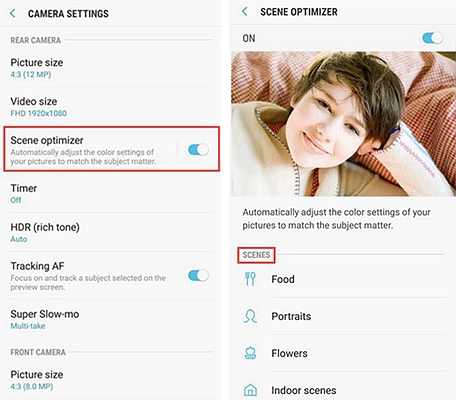 Point out flaws in your photo with Flaw Detection

A perfect picture should be flawless. Everything should be in place when you finally hit the capture button. What if a small mistake happens? Should it ruin the whole picture? Not if you have the Flaw Detection feature of the intelligent camera on the Galaxy Note 9. What is this feature all about?
Flaw detection automatically detects flaws in photos you have just taken and informs you so you can capture another photo while you still have the perfect shot. Whether it is unintentional blinking or the image turned out blurred, Flaw Detection gives you the chance to correct the mistake right there and then.

Flaw detection is fast and gives second chances. You will receive a notification that there is a flaw in the picture as soon as it is taken and you can take another one which is better. If you are a perfectionist you will love this feature that allows you to take the perfect shot. It is not just motion blur and blinking that ruin a perfect shot. Even lens smudge and backlight can make the perfect photo into a really horrible one. Flaw detection will tell you when these are standing in your way. 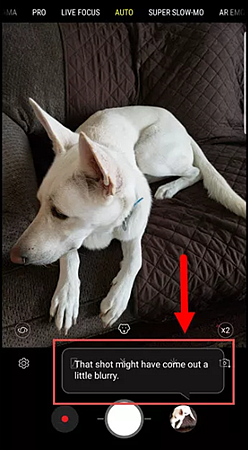 Let us look more at each of these flaws that the artificial intelligence in the camera detects. One is the lens smudge which can be roughly defined as the lens being dirty. If there is such a problem, you will be notified immediately you start the camera app. When you see this notification, close the app and clean the lens before using it again. This is a very useful notification because smudges on the lens reduce its longevity.

Backlight is another flaw which occurs when the light behind the main object is more than that in front of it. This causes the image captured to be unclear. To detect this flaw, the AI determines the saturated areas in the image and compares this to the main object. The suggested remedy for this flaw is switching on HDR auto.

Closed eyes flaw is usually due to the object of the image (a person) blinking. AI determines this flaw by measuring the eye size in preview and that in the image. To correct this, take another shot with the person’s eyes open and advice to avoid blinking.

Whether it is you who moves or it is the person whose photo you are taking, photos with motion blurs are not cute. In fact, they are outright ugly and AI can detect this using sensors fitted on the phone. Take another image with everyone remaining steady this time. Just remember to delete the blurred one later on.

How do you enable the flaw detection feature?

With the camera app on, tap the Settings button. Under the common section, tap on “Flaw Detection” so it is blue in color. 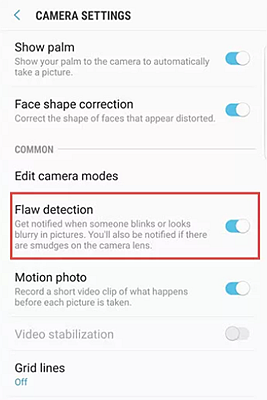 How to turn off scene optimizer and Flaw Detection

While at other times you may need these two features, there are times when you will want to have them off. How do you switch them off?

To turn off the Flaw Detection feature, open the camera app and tap on the settings app. Scroll down to the “Common” section and there tap on Flaw Detection so it is gray. It is now off and you will not receive any notifications even if something is wrong with the image just captured.