OnePlus 6T: Everything You Need to Know About the In-display Fingerprint

With the OnePlus 6 already a highly rated mobile device, the OnePlus 6T variant arrived with a lot of expectations. Some of the features introduced in the latest phone from OnePlus are quite eye-catching. However, the pick of the bunch is undoubtedly the in-display fingerprint sensor. It is a clear departure from the usual rear fingerprint scanner commonly seen on most mobile phones and allows you to unlock your phone without even lifting it up.

Like any other new technology, it will take some time to achieve perfection and there will be other upgrades and creative additions in the future to take it up a notch. Here is everything you need to know about this new feature in the OnePlus 6T.

Apart from being a fascinating feature on a mobile phone or any kind of device, the in-display fingerprint is relatively new and it has some advantages over the conventional rear end scanners.

• Given how long you spend on your phone, it will need to be unlocked many times in a single day. An in-display fingerprint provides a shorter route to do this without the need to reach below the camera to tap on the usual fingerprint scanner.

• You can unlock your phone if it is lying on your bed, table or mounted in a moving vehicle without necessarily picking it up as a phone with rear end scanner. Simply tap on the scanner staring you in the eye and you can start using your phone again.

• It works for damp and cold fingers because it uses optical sensors to capture your fingerprint image.

• This type of fingerprint sensor is built for new-age phones because optical sensors are very thin and do not contribute to the thickness of the device. It is a perfect fit for sleek, lean phones that are currently in vogue.

The in-display fingerprint is clearly a new innovation that will appear in more mobile phones in the nearest future. Its state of the art operation and appearance befits a device like the OnePlus 6T without a doubt.

Like any other new innovation, the in-display fingerprint scanner has its shortcomings. Some of these will be resolved along the line as feedback from users is used to fine-tune the technology behind it. 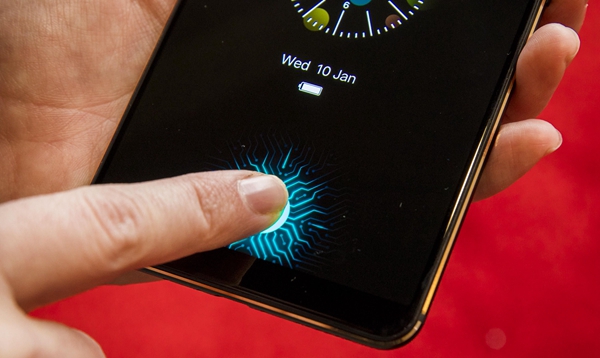 • It is not advisable to use any kind of protective glass on your device as this will interfere with the sensor’s readings. The in-display fingerprint scanner could misread registered fingerprints and malfunction in other ways.

These disadvantages mostly border on the fact that the technology is still quite new and the OnePlus 6T is one of the few mobile phones that have it. Having said this, it might be impossible to add a tempered glass to any device that has this feature as it will clearly send conflicting signals to the sensor beneath the screen.

How to use the in-display fingerprint on OnePlus 6T

To use the in-display fingerprint, you need to go through a simple registration process to make sure your fingerprint is recognized when you place it on the screen. To do this

Step 1. Go to the settings menu on your OnePlus 6T mobile phone

Scroll through the categories until you find ‘Security and Lock screen’ option.

Step 2. Select it and you will find a number of security options listed here. Choose the fingerprint scanner option

Step 3. A pop-up screen will come up and request you to enter your pin to proceed to the next menu

Once your pin has been entered, you will find a sub-menu that allows you to add your fingerprint to the scanner

Step 4. A highlighted area comes up with a fingerprint icon in a light blue color

Step 5. Once this is complete, you are ready to start using the in-display fingerprint on your OnePlus 6T

You can choose from a list of available animations for the fingerprint scanner. It is a simply an aesthetic feature and has no effect on the scanner itself 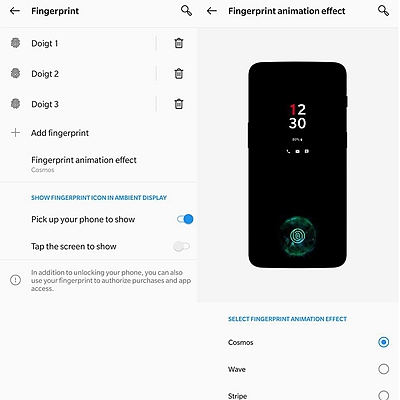 Unlock your phone with in-display fingerprint

Step 1. To use the scanner for the first time, press the power button or double tap the screen to turn on your phone screen.

Step 2. A small fingerprint icon will be visible towards the bottom of the screen. This is the scanner that allows you to unlock your mobile phone

Step 3. Tap on it gently to unlock your device. It will only take a few seconds and your phone is unlocked and ready for use.

• If you would like to switch to another security option at any time, simply follow the steps listed above and choose from the list of available options.

Unlike other phones released by OnePlus, the 6T has no physical fingerprint scanner. It is a welcome upgrade that makes the phone more sophisticated and attractive. Despite being marginally slower than the conventional fingerprint, the in-display scanner is still quite fast and effective. It is also precision engineered to give it little or no margin for error. This makes your mobile phone very secure and ensures that it cannot be unlocked by any other person.

Use the novel features and groundbreaking technological advancements available in the latest OnePlus smartphone which is the OnePlus 6T. It comes with a facial unlock security feature that measures up with the very best as a high-grade addition. In tandem with the in-display fingerprint scanner and a superb display interface with a reduced notch, it makes the OnePlus smartphone a dream device in this modern age.